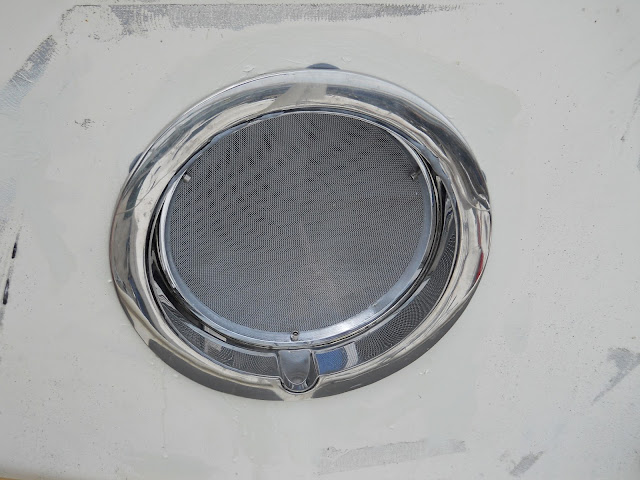 No, this is not a duplicate post of this one from last fall. It is, however, an illustration of how outside forces can derail certain aspects of the renovation schedule. Above you see a completed installation of the fab Newfound Metals portlights, for which I was grinding larger holes late last September. I had actually dry-fitted them as ye olde post describes, but I ran into a run of work, had to pull the other boat out of the water, had to secure permission for further time on land, made a fairly critical bit of ligament in my left arm n0n-functional trying to hand-lower big batteries off the boat (note to self: Warm up muscles first, then purchase small crane.)

Then we had an appalling winter and an appalling spring. Despite arm protests, minus the problematic waving, I managed to do a little work aboard, and replaced the plastic sheeting over the gaping portlight holes four times, and the tarp I keep over the pilothouse roof until I can find a replacement for the Atkins and Hoyle gasket that doesn't cost fifty bucks, a total of three times.

The good news is that not much else leaks. At the moment. We've had so much rain this year that if it did, the bilges would be awash. Awash, they are not.

I was able to prime the holes in April, but I only got time, sunshine and heat enough to mix up the Endura two-part epoxy paint I use for touch-ups this week. It was also an opportunity to paint over some scraps and dings, and, I suppose, a glimpse into the future, when I expect a weekly "hour of touch-ups" will be on the activities board of international travel.

The butyl pun, of course, refers to butyl tape, a humble and venerable synthetic rubber compound with the consistancy of bubble gum, a tendency to self-adhere, and a great ability to keep water out. Having found, while doing various repairs, gobs of "still alive"...as in still flexible and damp-feeling...butyl used as bedding and sealing material on the nearly 40 year old Valiente, I grew to appreciate butyl's qualities, which are somewhat passe in this age of more modern and glamorous polymers, compounds and sealants.


Nonetheless, I've decided in concordance with other boat fixers (a secretive and possibly inebriated clan of misanthropes for the most part) that butyl would be the way to keep the sea out of the pilothouse portlights, assuming, of course, that the negligent crew had remembered to dog down the lids when the wind piped up.

I wrapped narrow, snot-like strings of butyl on the trim rings (the outside SS rings through which the body of the portlight passes), going inside and outside the 1/2 inch little stubs into which the mounting bolts went. Then I pressed slowly and firmly on the rings until they stuck to the recently dried epoxy paint. You can see a little bit of extruded grey stuff above, which I will trim with a little Exacto knife...apparently a Canadian term, so for my southern readers, think "artist's boxcutter", I suppose. I used Sikaflex 291 on the bolts, using a "twirl around the middle of the bolt shaft" techniques I've found keeps the threads dry and yet allows removal if needed.

I created a second gasket around the sort of flange that pokes out of the boat a bit. Then I spent about a hour gradually tightening with my largest socket wrench the rather unusual 6 mm bolts I had to travel by bike to Etobicoke to obtain. The whole assembly, crudely cut "spacer" rings and all, is now practically welded together, and if leaks appear, they should be immediately obvious, as restoring insulation and panelling and wood trim that will bury that crudely cut ring is one of the last jobs I'll tackle pre-departure.


Note the little chain thingie at the top of the photo. That's the little clip that holds the portlight open as needed. I drilled a couple of boltholes in the aluminum roof "underflange" to mount them, but that area will also one day be restored to a more shippy, woody look and they'll probably go into a piece of glued wood at that point. Today's point is that tomorrow's rain will not enter the pilothouse, and the next time I'm there, southerly or northerly breezes will suck the heat out better than previously, previously being 1/2 inch clear circles of Lucite, bolted with 30 little bolts.

A last word on butyl: The aforementioned aluminum roof is, of course, through bolted to the inward top flange of the sides of the steel pilothouse. I have already repainted that flange, but will likely create nylon bushings and will apply goo of the galvanically isolating kind to keep the SS bolts from reacting with the aluminum roof, through which I have run and will run again considerable numbers of volts and amps for the various pilothouse gadgets, sensors and lights. In addition, I will use thin strips of both bedded HDPE plastic and a special sort of butyl used in roof sealing called EPDM rubber in order not only to electrically isolate the metals, but to keep the sea out effectively if we take a wave. I have found evidence that the bead of 5200, while personally challenging to my sabre-saw blade budget, was not entirely good at keeping out the water, which is not my idea of proper to a voyaging vessel.

Gotta love those portlights. So nautical.

FYI, X-ACTO (spelled like that) is an American company, and as far as I know it's nearly become a genericized trademark for any brand of hobby knives. It's a pretty common term in the US, at least in my experience.

OK, I stand corrected, then. I just assumed "box cutters" were the generic term, which I had never heard before, say, late 2001.

Anyway, I have a pretty fine bladed one I'll be using the trim back the butyl in a couple of days. I may finish it with a bead of Life-Caulk or something similar. Thanks for the comment. Really, they are an improvement because while I love the pilothouse, it can get like a greenhouse in there and this is a way to get ventilation happening. Also, "brutally overbuilt" is the way I pimp my ride.

A box cutter to me means the bigger ones that use a razor blade.