On both my 33 and 41 footer, even though they are quite safe boats in an absolute sense, I usually wear my auto-inflatable PFD. While I make it optional for adults, all children under 18 must wear the foam type, of which I have a variety of the manual and autoinflate vests, plus a number of the foam type in a range of sizes for the kiddies and visitors.

Plus a bag of the obligatory old foam types used mostly as cushions, but which allow me...legally...to carry about nine adults. 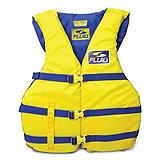 Not that I do. But then I don't race the boat. Others have, and that's why there's a bag of untouched cheapo legal foam types aboard.

In addition, we have tethers and carry knives, Fox 40 whistles and the occasional strobe.

I won't even mention the waterproof VHF, the ACR personal locator beacon or the hand flare in a baggie I bring on deliveries. Let's just say I'm personally drowning-averse, as one is. And yet people drown across Canada, and elsewhere, with alarming regularity.

Let's just say we will be fully equipped...and fully habituated...to boat rules like "mandatory PFD wearing on watch, mandatory tether on watch, mandatory clipping on jacklines when working forward and no leaving the cockpit without waking a crew". These were the rules on my first Atlantic delivery, and, having nearly slipped out of the cockpit at 3 AM when we slid off a wave, only to be stopped by my tether, I see no reason to modify them in concept or practice.

Does this mean a full, awake, daylight crew in an angel's fart breeze on a tropical beam reach requires full time PFDs? Maybe not, if you can outswim the boat. It'll certainly leave interesting tan lines given the clothing-optional nature of passagemaking!

Now, when I sail alone, or when I am in either my Portabote or my sailing dinghy (about 10 feet each), I wear an old purple and yellow kayaker's vest. Why? Because if I'm alone, off or out of the boat, and *unconscious*, the bulky, unfashionable, hot and slightly stained foam vest will keep my head out of the water. I know this, because I've jumped off the boat and even when I relax, I can't easily even put my face in the water.

So even though I realize I might drown or freeze anyway, the vest means that if I am merely stunned, I might "come around" without aspirating water, which is perhaps the difference between a bad situation and a fatal one.

I've seen this new, "not USCG-approved" system by Spinlock called the Deck Vest, and I like the fact it's a PFD with crotch straps, with an integral harness and plenty of reserve buoyancy, and yet it fits closely. A crew, a Canadian army major, wore one on an Atlantic delivery and he was a pretty large guy as am I and he remarked on its comfort and utility. And of course if you are tethered, the crotch straps keep you in the PFD if overboard, and allow you to rotate yourself from an inverted position, as can happen.

If injured, but conscious, it would also aid crew in clipping the tether end to a line reeved onto a block on the boom, so it can be considered an option in a retrieval system.

You can't always save yourself or be saved on a boat...or off it...but thinking about why it's clever to wear a PFD when underway increases one's chances. Also, if you like to boogie on deck, PFDs protect you from inconvenient obstacles, like the mast.

Marc....please check the tether where it attaches to your harness. Apparently there's a possibility that the release lanyard can break off due to a weak split ring attachment. There is a recall in place.

Thanks for the concern, Ken, but I don't actually have that particular model. I just have straight webbing ones, although it is a Y shaped type with short and longer tether. I heard through Practical Sailor magazine of the split-ring problem and the recall, but we won't buy this type of "springy" two-length type with the whoop-te-doo quick release...with a beefy ring or proper pin.

A couple of tethered sailors died last month in the Mackinac race when they were trapped under a flipped boat in a horrendous 100-knot squall. It's thought that they were unconscious and couldn't free themselves.

But isn't the picture of the tether above is the type that we're talking about?

Yes, but in the words of Monty Python and the Holy Grail "it's only a model" as I couldn't find a picture of the one I have that I bought years back at West Marine (oh, the shame!), but which I won't criticize because it kept me out of the Atlantic when Bruce Clark's boat threw a wobbly in the middle of the night and I slid under the lifelines...except the basic yellow tether kept me aboard.

But I like the idea of "retraction" and the idea that the threads changing appearance alert the user to the fact that it's been overstretched.