Any boat restorer will admit that progress is incremental. One reaches a point when the boat can motor and sail, perhaps, but not at night, because the lights aren't currently (so to speak) hooked into the panels for some completely unrelated reason. So there's a reluctance at times to finish one class of job, such as "making the boat move" in order to start another that will take time, effort, supplies, sweat, and time away from sailing, like "getting the fridge to work".
This weel, after the strategic acquisition of several bits and pieces (how, I ask you, could I run out of 2/0 gauge power lugs?), I decided to hook in the house bank to the DC panel. Due to some particularities of the installation, this turned out to be, while not overly puzzling, pretty laborious and hot, cramped work.
While I was cutting and crimping and labelling and heat-shrinking around the boat's middle, Mrs. Alchemy was spraying cold galvanizing paint over the (relatively few) rust spots in the forepeak workship, and then applying a sort of patchy white Tremclad top coat that, if nothing else, alleviates the gloom until I can get lighting installed in there. There's DC and AC runs roughed it, but I have yet to trace them back to the panels. I suspect they are just looped and tucked away in the general vicinity.
The general idea is that the mass of tools littering the aft cabin and the pilothouse lockers will be shifted forward and some lead "trim ballast pigs" will be shifted aft. There's about half a tonne of these lead ingots; as we add tankage, spares, tools and provisions, I will shift them down, back or off.

Back in the crimpware section, I was running short of power lugs. Hard to believe, but true.
A flying visit to the local chandlery got me a bag for 25 for about $60, the cheapest marine thing I bought all week. 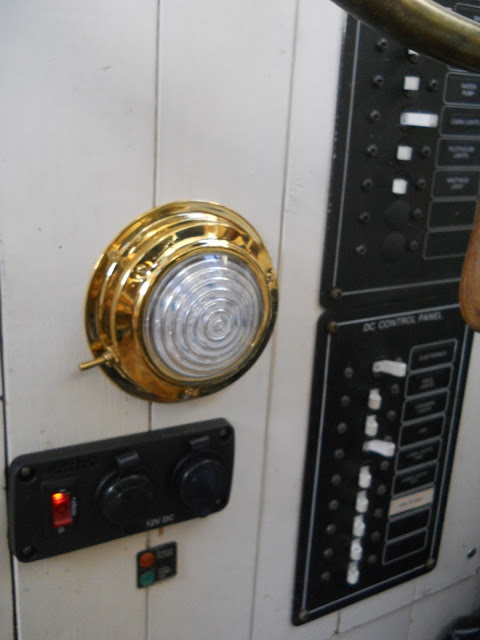 Because I like convenience as much as anyone else, I added this socket and dual USB charger plate to the helm station. That whole area has gotten "busy".
The positive side of the house bank feeds now through a shut-off right above it, but aft. If a battery fails in in a sparky or splashy manner, this is the disconnect.to the main busbars.
The negative side needs a shunt close to the battery. A shunt is premised on exact measurements of resistance in order to gauge current; with it, a properly configured battery monitor can gauge how much current each circuit on board (or a variety of circuits over time) is drawing. It's firstly a measurement device and secondarily a way to trace, by process of elimation, which circuits are drawing unusual amount of juice. I have two more for the solar and wind charging sources; used in conjuction with this one, I will be able to measure with a fair degree of precision how much electricity we use aboard and how much we can make via sun, wind, alternator, and, if necessary, plugging into a Honda 2000. Given my calculations, that should be more optional (like I don't want to initiate DC inversion) to run power tools aboard than necessary to keep precious icecubes in play.
The usual issue with boats is finding places to put things. There's a handy gap at the top of the mid-ship half-bulkhead accessible under the head sink. The plumbing, both feed and drain, is well away from the "walls" here, so I thought this a good, quiet place to put the main positive bus bar. 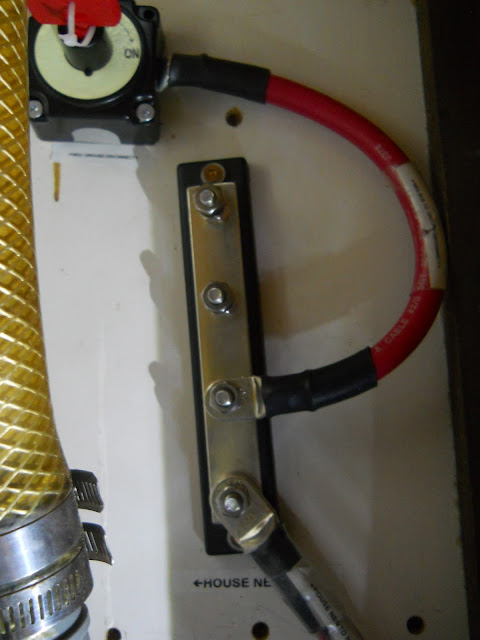 The negative bus bar is on the bulkhead 90 degree away and about 18 inches in distance. A refinement to the usual "just clap the ground here" is that this circuit also has a disconnect, meaning that if I wish to utterly isolate the house side from the starter bank side, I can. The starter bank and house bank negative cables are grounded at the engine block.Shortly, I will be adding a ACR to allow charging of both start and battery banks. But for now, I'm still on the master switch.

And here it is. We've seen it before, but now it's fully hooked up. I can start the engine will either house or starter bank (the sad little Group 24 I've been using as a house bank and bilge pump battery for far too long).

Next up is running a couple of mercifully smaller leads (1-2 gauge) to from the power busbars to power the "unswitched" DC loads, such as the fridge/freezer, which honestly I don't even know if it runs anymore, and to tie in the bilge pumps to the house bank. I also have to secure and tidy up these heavy leads with loads of tie-downs to avoid chafe, and the holes I've drilled need to be split-gasketed (McMaster-Carr makes some nice ones). After that, hooking up the nav lights in order to sail after dark. We want to take a little trip next week, whether I've rebuilt the saloon stairs or not!

Nice wiring job! Well labelled too. Is there an inline fuse within 7 inches of the battery positive terminal to protect the 2/0 feedline from battery to your first switch?

There's a similar fuse within seven inches of the start bank, as well, which is also 2/0 ga.