The fellowship of the ring buoy

This is a ring buoy, also called a life buoy. It's not strictly necessary on smaller private yachts and I believe it's not entirely to code without a long length of floating line and a light that will switch on when it hits the water; its use here is to be ring-shaped and thus justify my stupid Lord of the Rings pun in the blog post title.

Said pun is being made to underlie that there is, in fact, a fellowship of the sea, or at least the boatyard, one in which sailors help sailors to get sailing. I have sailing friends who help me with boat jobs and I try to help them. I was helped in my earlier, more ignorant days and in turn, it's me who steps aboard other peoples' boats to act out Return of the Atomic 4 Whisperer. A modest if kind example of that was the recent offer of Bob Salnick, proprietor of the Puget Sound, WA-based S/V Eolian and also of the excellent resource blog smallboatprojects.com, to make me some white on clear plastic labels.


Now, we've never met, though he's been kind enough to link this blog to his own and has over the years cross-posted some of my posts where I've exhibited an ounce of wit. Nonetheless, he had the means to be helpful, and was.

Bob had seen a previous post in which I brought 120 VAC to the forepeak workshop, but alas, a rather sad attempt at label-making. Mine doesn't do white on clear and I need to buy plastic tape, as, let's face it, paper just doesn't do the trick (see above).

Inside an attractive card was two little labels from a Brother label maker. Every sailor has his/her favourite as without labels, modern boats would be incomprehensible. I mean, to the Pardeys, an oil lamp is obvious.
Bob's second label found a home on the DC panel, because I want to run DC forward for LED lighting and perhaps a small inverter or a 12 volt socket. Thanks to Bob and all the other helpful sailors to whom I owe a rum or at the very least, the wish for fair winds. I don't hesitate to offer help these days to other sailors thanks to the examples you've set.

There's been a small leak from the starboard forward pilothouse portlight, which is tempered glass. The rubber truck-style gasketing appears to be failing and will be replaced this summer. The glass looks good enough to remain if we can source a couple of those suction cup thingies to handle it once free of the frame. The frames are no doubt a touch rusty, as the paint job above now masks and will need remediation. 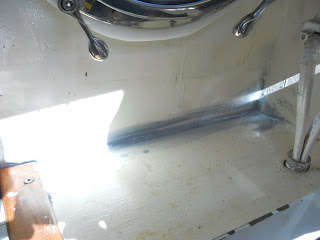 A similar situation pertains in the starboard aft part of the pilothouse, although it's less a leak and more a dribble from the less-than-watertight drop board of the companionway hatch. The prevailing westerlies drive rain and even snow past the drop board; it melts and collects under this portlight. The fixing is done with a quick scrub to remove dirt and loose rust, followed by  a coat of Ospho, a rust-converting metal treatment (NOT A PAINT, as they insist) that binds with rust to make a less-permeable surface suitable for priming. Becky put down a two-part epoxy and will top it with our "cream" two-part paint for a more durable surface...until we can reset those windows and upgrade the companionway "door".

Don't quote me, but I think I bought my big suction cup with handles at Harbor Freight. ( if you have them up there )

You're much too kind Marc. And I see that I should have used a smaller font...

Bill, we have something similar called "Princess Auto", although I can always find a reason to make a run for the border...thanks for the tip!

Bob, perhaps I haven't mentioned why I never became a pilot...big fonts are cheerfully accepted!